Welcome back warm weather and sunshine.......

We left this morning at 8:30 to head for Tucson. The sun was shining and it was a beautiful morning. The last time we visited Tucson we discovered a gem of a campground called Gilbert Ray located in Tucson mountain park. The campground is located between old Tucson, the Desert Museum, and Saguaro National Park.

Our campsite is large, secluded and surrounded by practically every type of cactus in Arizona. We overlook a dry wash and have a nice view of the mountains.

We are enjoying some desert hiking and we had an evening drive through the Saguaro National Park. We plan on spending  another day here before moving on. 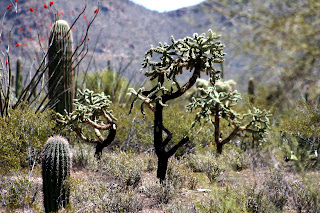 We thought we would leave City of the Rocks State Park early this morning to beat the pending strong winds that had been predicted for this afternoon.  After three hours of white knuckle driving with winds that had us bouncing all over the freeway, we decided enough was enough.  So, based on a suggestion from a fellow camper we met last evening, we pulled into Kartchner Caverns State Park, Benson Arizona. We have a lovely camping space and we have reservations for a cave tour.  We are going to Tombstone and possibly Bisbee later today and check those areas out.

As soon as we got settled in our camp site it began raining harder and the temperature dropped enough to send us scrambling for long pants and jackets.  Next, the sleet, hail and snow all came!  We took the cave tour and were able to warm up; it was much warmer in the cave then out.

After the tour we drove to Tombstone. Freezing temperatures and blowing winds put a stop to a lot of walking around town. On the advice of our 11 year old granddaughter we had dinner at ‘Big Nose Kate’s Saloon’, now, how do suppose an 11 year old knows about a place like that? By the time we finished eating it was too late to head down to Bisbee.  Anyway, despite the weather we had a good day.
Posted by Richard at 5:36 PM No comments: