Cities of the Dead

We went back to town this morning to visit the famous cemeteries of New Orleans. I cut and pasted some information I found online to better explain these famous places. We started at St Louis Cemetery #2 and went on to the most famous St Louis Cemetery #1 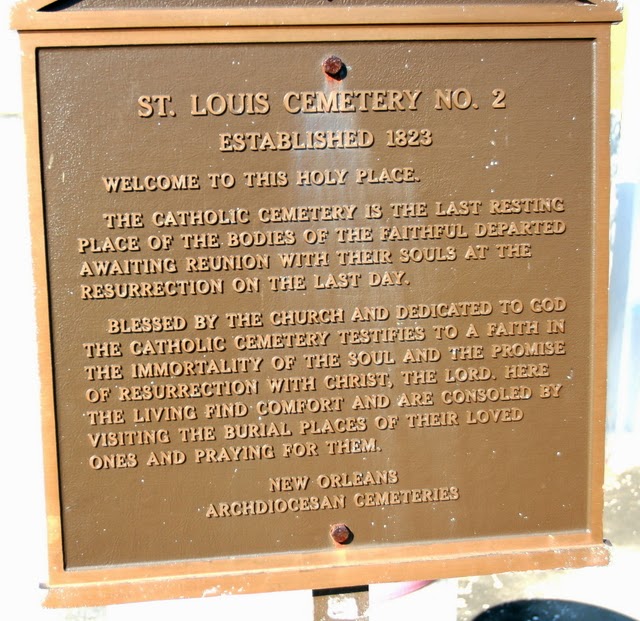 Only in New Orleans, which is unique in so many ways, could cemeteries be major tourist attractions. However, because the city is built on a swamp, the deceased have to be buried above ground here in elaborate stone crypts and mausoleums. Over time the cemeteries, with elaborate sculptures and other decorative artwork embellishing the tombs, have come to come to resemble small villages. They are known by the nickname of “Cities of the Dead.”
The most famous cemetery, St. Louis Cemetery #1, is walking distance from the French Quarter and the Downtown area. 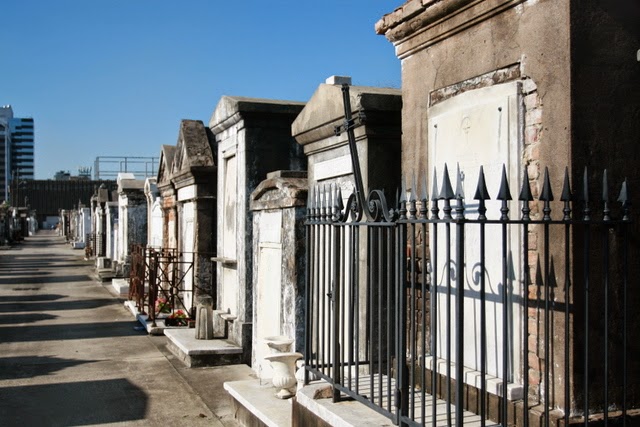 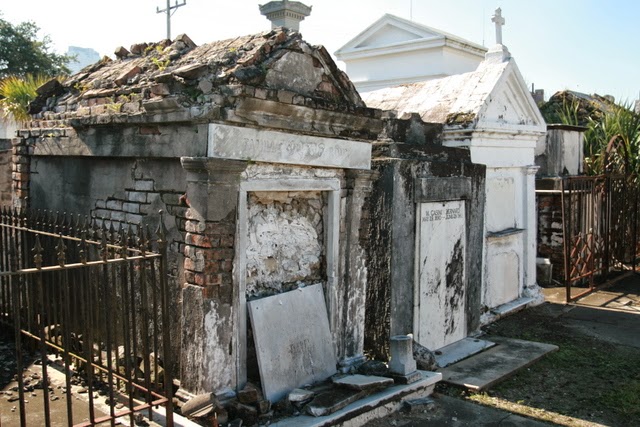 Many crypts are in disrepair 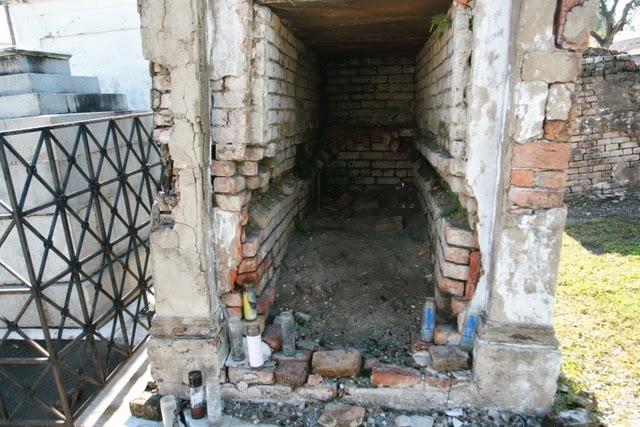 I'm not sure what we are looking at here 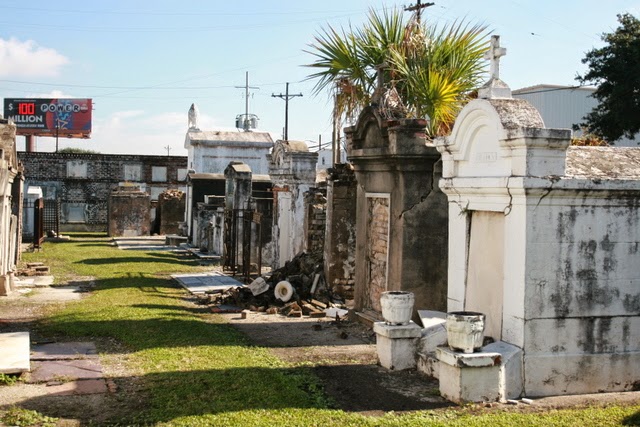 Again a lot of disrepair 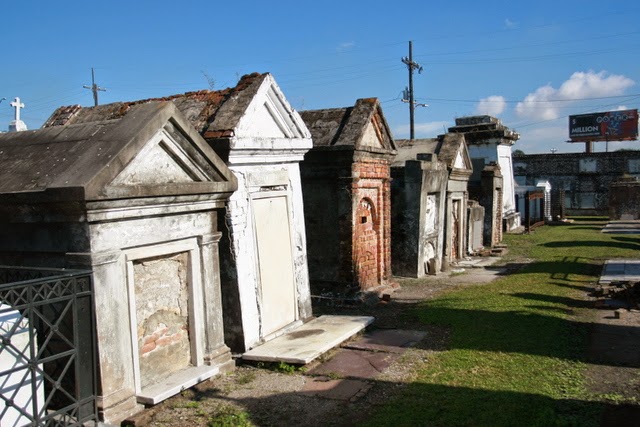 Cities of the dead 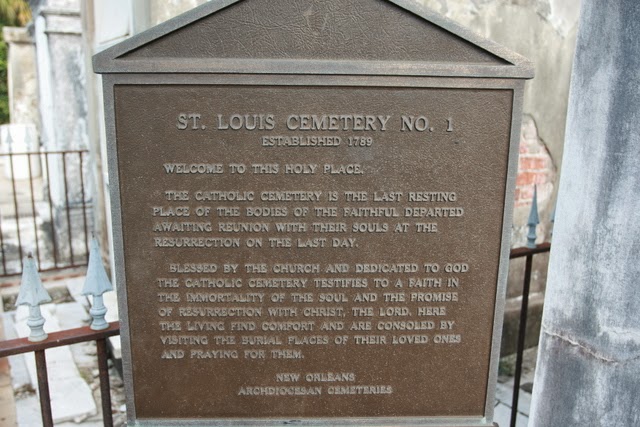 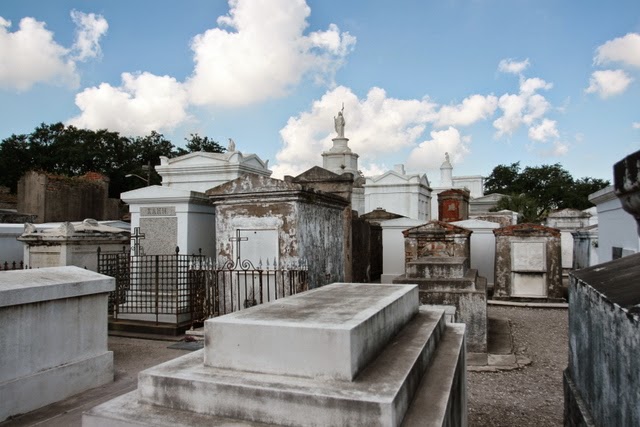 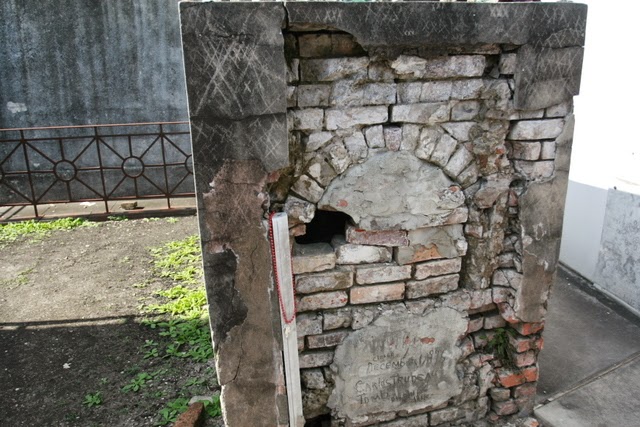 Located on historic Basin Street, it is the burial place of Marie Laveau, the legendary “voodoo queen.” Believers and non-believers alike make pilgrimages to her tomb to make offerings to her spirit in return for what they hope will be blessings. The many “X’s” scrawled on the tomb attest to the power she is believed to wield, even long after her death. 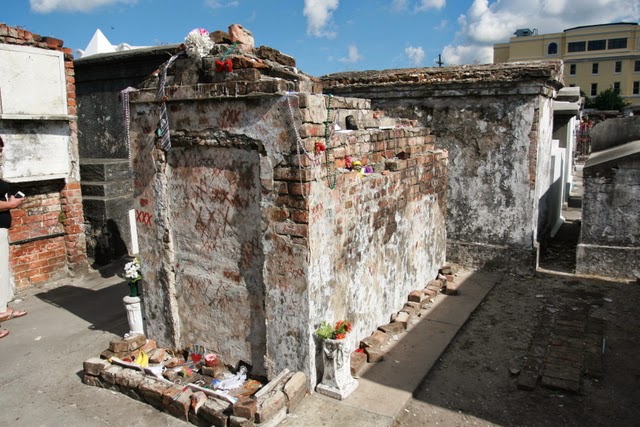 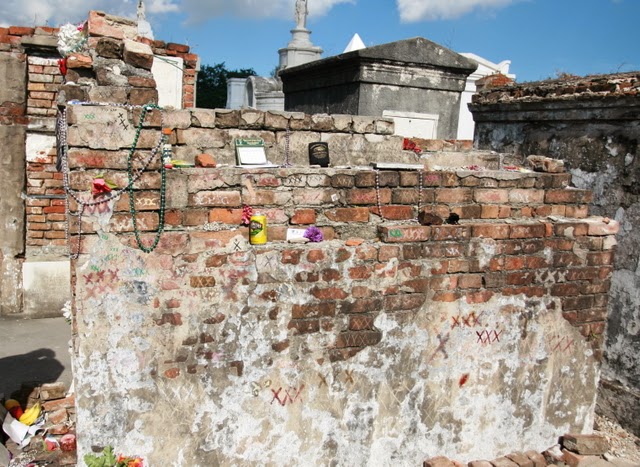 Many offerings are left daily 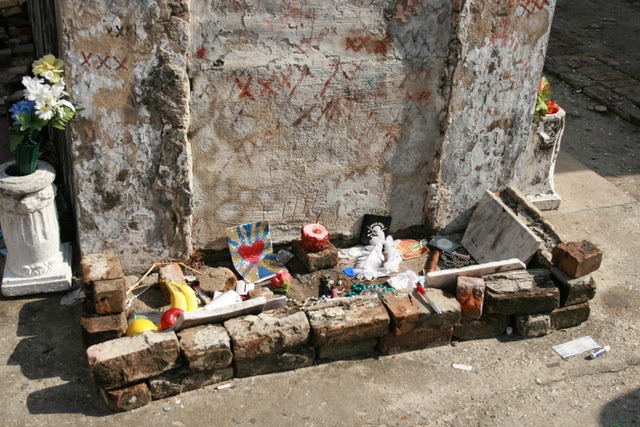 The beautiful Marie Laveau, and yes she was beautiful, was born a Free Woman of Color in 1794 and died an old woman in 1881. She became the most famous and powerful Voodoo Queen of New Orleans. She was respected and feared by all. Voodoo in New Orleans was a blend of West African religion and Catholicism. Voodoo deities are called Loahs and they are closely paired with the Catholic Saints. All people in New Orleans were Catholic and slaves were baptized. Marie was a devout Catholic and attended Mass daily. Marie began as a hairdresser and later became a nurse during the Yellow Fever epidemics. She was skilled in the practice of medicine and knew the healing qualities of indigenous herbs. Concerned about the soul too, she would sit with the condemned in their last moments sometimes serving them their last meal. She was the first commercial Voodoo Queen and she specialized in romance and finance. She was an astute business woman. Marie was all-knowing and all-powerful. She could easily help you get a lover, keep a lover or get rid of a lover. Marie married Jacques Paris at St. Louis Cathedral when she was 25. He disappeared 6 months later and from then on she became known as "The Widow Paris". A year later she became the common law wife of Christopher Glapion and had some 15 children by him. The youngest of these, also Marie, followed in her mother's footsteps and succeeded her. It is believed that you can come to Marie's tomb and ask for something. She accepts money, cigars, white rum and candy as offerings. Appeals must be made 3 times with full concentration. In voodoo it is believed that when a Voodoo Queen dies her spirit re-enters the river of life and moves to the next realm, adjacent to this one. Her spirit will always be here, close at hand, in New Orleans. To this day, people still visit her tomb with the hope that she will grant their wishes. 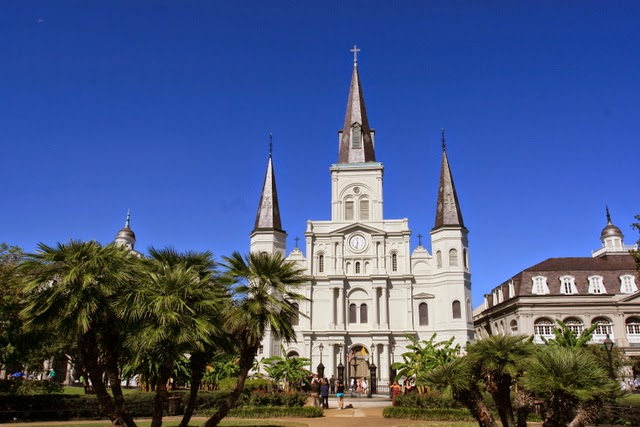 
We spent the remainder of the day driving around the city and exploring some of the neighborhoods. We drove along French Street which is reported to be the place for music and food that the locals go to. It’s not near as crowded as Bourbon Street and is said to be less expensive. We saw the trolleys and street cars that make their way from the center of the city. We drove past the Silver Dome and returned to the French Market where Chris picked up a few things. 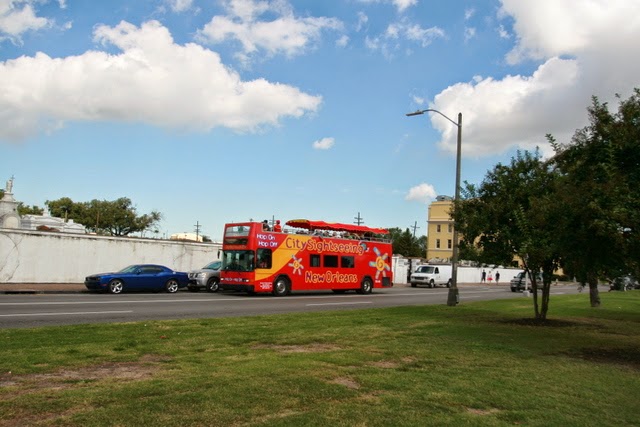 Hop on Hop off tour bus 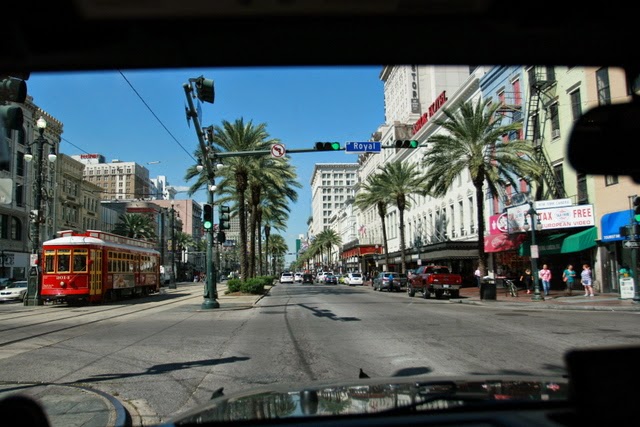 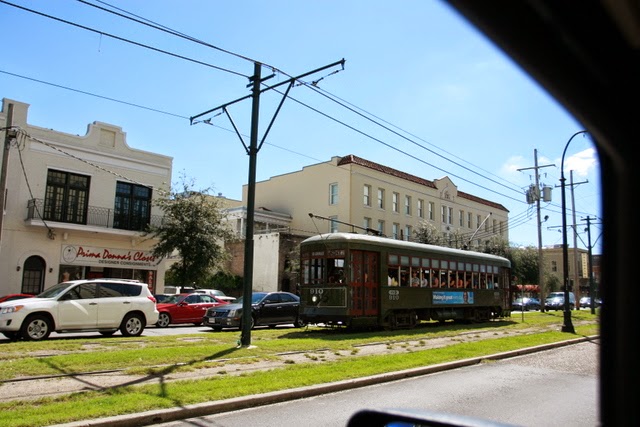 St Charles street car is the oldest continuously operating streetcar in the world!  It has been running daily for the past 150 years 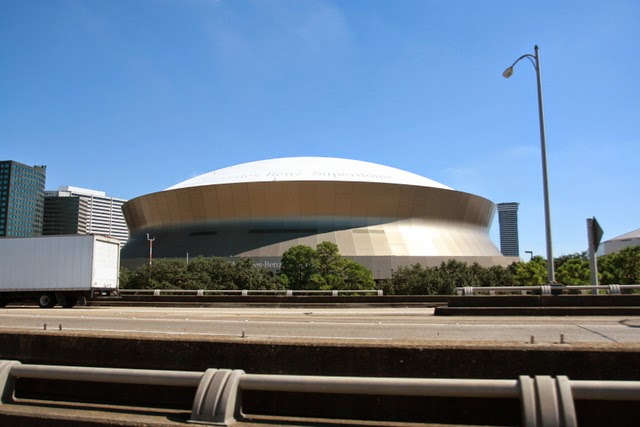 We returned to the State Park and explored areas that we haven’t seen yet. It is really a pretty park with lots of room for day use besides the campground. 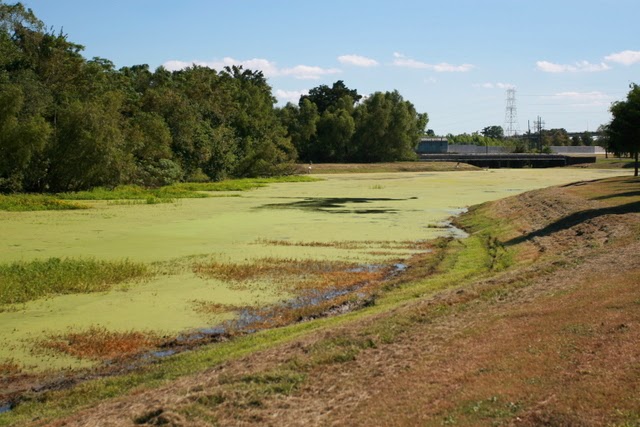 Canal that runs through the park 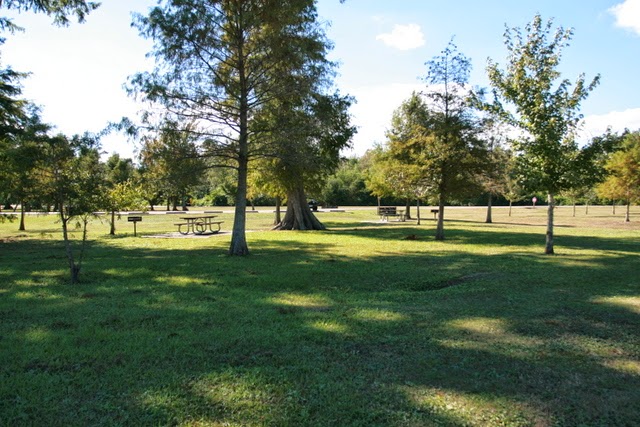 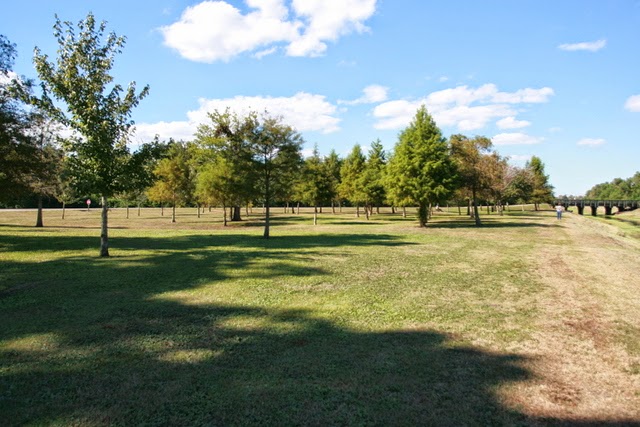 Posted by Richard at 7:47 PM No comments: